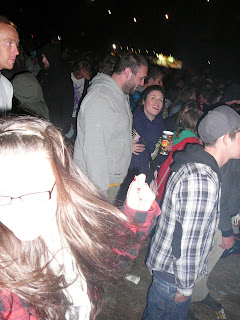 Oh, the aftermath. It is nearly over, but it has been painful. I would like back all the sleep that I was deprived of. I slept even less than I anticipated I would. 2 hours on the first night. Excellent.

That said, it was, overall, definitely worth it. I have my gripes about the organisation, and there were a few things that are pretty shameful for such a long-running, established and seasoned festival. But when you get to see performances like that of Everything Everything, Arcade Fire, LCD Soundsystem and Funeral Party it is made all the better!

Obviously camping was awful. It had a few amusing moments. Some boys nearby quoting Toy Story. Another boy shouting 'Ben' in a strange voice for nearly an hour. On one day someone shouting "FUCK OFF!" then a pause "I FUCKING HATE CAMPING!".. I feel your pain. Waves of cheers were an auditory delight. The bass from Picadilly Party until nearly 5am shredded my famously fragile nerves.

There were moments of sheer joy. Tears at the wonder of Arcade Fire. Elation on seeing Kieran Hebden (Four Tet) in the flesh. Literal slack-jaw gawping at the energy of Funeral Party.

I'm probably going to pick out stand out performances and blog separately about those bands. But needless to say I was very lucky and fortunate and saw some fantastic acts.

But the organisers of Leeds Festival have left a sour taste in my mouth. Over the years they has put on this event they must have learnt an awful lot of lessons. Many things were vastly improved. But in my opinion they sold the soul of the festival to reignite some lack-lustre, nostalgia-provokers. There was little effort elsewhere on the bill. They should not have named the Dance Stage as such. The sound quality on the main stage was disastrous for many of the acts. Don't even get me started on the shambles that left my best friend devastated that was the performance by Mumford and Sons. Horrible advert folk. But nevertheless, if people next to you spoke you couldn't hear the band. WTF Leeds?! £180! I fucking brought my own accommodation, you twats!

I am clean now. I still have all my personal belongings and most of my dignity. Pictures are available on my Facebook.
Posted by Steph Mulrine at 12:04 pm No comments:

This track has been kicking around for what feels like ages. And it is a slow release kind of track. Like porridge. A porridge track, if you will.

It definitely doesn't need anything adding!

I don't know why I've not posted this sooner! Browsing the wonderful Shattered Satellite reminded me.
Posted by Steph Mulrine at 1:22 pm 2 comments:

Email ThisBlogThis!Share to TwitterShare to FacebookShare to Pinterest
Labels: Para One

I'm still at Leeds Festival. Most likely I will be very unhappy at my general appearance and having not slept properly for 3 consecutive nights.

But I'll be coming home straight after this band. And probably on a massive high. And I'll probably think it was all worth it.

I may explode on this day at Leeds Festival.

I have posted this video before. I make no apologies. Mark Heap is a stunningly wonderful actor. And the track will never lose any of its wonder.


Four Tet - Smile Around The Face
Posted by Steph Mulrine at 1:21 pm No comments:

The first actual proper, actually proper day of Leeds Festival. I'll most probably be a little bit hungover and nervous of the prospect of two more nights camping. It is rank.

But the highlight will definitely be the main stage headliner. And, in fact, the only real time I'll be at the main stage throughout the weekend will be this day.

I must add when looking for a video, I found several videos of people's babies dancing and enjoying Arcade Fire. I nearly posted all of them instead. But they were just too cute. It may have induced vomiting.
Posted by Steph Mulrine at 10:14 am No comments:

I meant to blog this track some time ago. But you know, most things seem to impede me currently.

The isolation of this video is familiar.

James Yuill - On Your Own from Ben Reed on Vimeo.

Posted by Steph Mulrine at 5:14 pm No comments: 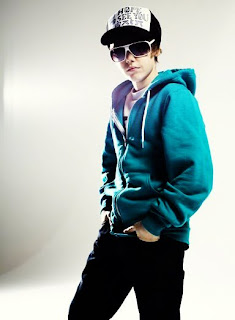 Yeah! That's right. Justin Bieber! I don't like him. I'm not on any sex offenders register.

But there is a Sound Cloud sensation going on and it has to be heard to be believed.

The Justin Bieber track You Smile has been slowed down by 800%. I think it might, or might not be by Shamantis. But trying to confirm it was giving me a headache. So listened to this track again. Absolutely mind blowing. As ambient as you'll ever need. And at 35 minutes long it would be perfect to unwind to.

I am going to Leeds Festival. I'll probably schedule some inane posts to pop up whilst I'm there.

But I thought I'd ask if, from looking at the line-up, if anyone had any recommendations?

But overall I am very excited.
Posted by Steph Mulrine at 11:09 am 3 comments: 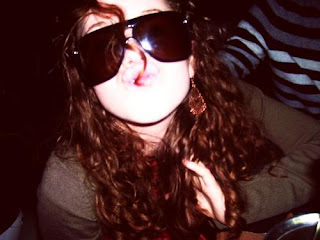 Unless you only listen to XFM and only read the Metro, you should be aware that dubstep is getting a great big bloody load of attention of late. Not least of all because, well, it's about time.

Katy B is fresh out of the BRIT School, which whilst has had a few dodgy alumni (Dane Bowers, Katie Melua and The Kooks) has helped produce some really fantastic artists (Imogen Heap and Amy Winehouse). And I think if this track by Katy B and Benga is anything to go by, she is certainly 'one to watch'. That phrase just made me gag.

I love this track.

Imagine if you only listened to XFM and read The Metro... Do you think people like that really exist? They probably like sitcoms with laughter tracks too. And use the phrase "I'm not being racist but.." a lot. And don't know who Jon Snow is. I hope I never meet one.
Posted by Steph Mulrine at 10:47 am 2 comments:

Email ThisBlogThis!Share to TwitterShare to FacebookShare to Pinterest
Labels: Benga, Katy B 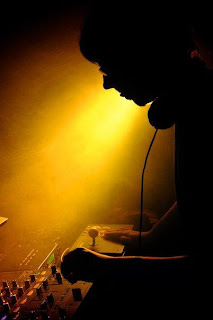 I'd like to share some information with you about Canblaster, but then I'd actually have to be in possession of that information.

It basically comes down to the fact I like how this sounds.

Email ThisBlogThis!Share to TwitterShare to FacebookShare to Pinterest
Labels: Canblaster

On occasion in order to move forward you need to retread the past. In becoming familiar with the good and the bad of what has happened it is easier to prepare and become keen-eyed for the future.

Whilst re-hashing an essay I recently made a mess of, and have cried far too many tears over, I am also having 1980's electronic pop whistling around.

This is for my increasingly short weekends.

Visage - Fade to Grey from JANUS MUSIC on Vimeo.

Posted by Steph Mulrine at 4:44 pm No comments:

Email ThisBlogThis!Share to TwitterShare to FacebookShare to Pinterest
Labels: Visage

Regardless of how big a sigh I might be taking this song can literally make me jump up and down.

Just great.
Posted by Steph Mulrine at 4:50 pm No comments: