Money is tight. As such I am spending more time in my office. It is easier to snaffle free leftover food and warm myself by hugging the neighbouring radiator.

I live for that radiator.

But in a shared office I am always the one people will have a chat to. Which is great! But I am juggling a mountain of competing deadlines.

Right now, I even have the brief luxury of an empty office so I even get to do a little jiggle to this.

Whilst I type. Always furiously typing.

Posted by Steph Mulrine at 2:50 pm No comments:

Avoiding this given the way 2016 has gone. But Aphex Twin has basically nailed what my sleep currently reflects.

All Wet is making me live.

Mr Oizo is always hotly, eagerly, keenly anticipated by me. This latest LP was no different.

And Quentin has made some friends!

Try Ruhe on for size. Collaboration with Boys Noize, remember? Yea, you do.

Try the rest of the album for equally skin-crawlingly, sinister and warped tracks.

Posted by Steph Mulrine at 9:23 pm No comments:

Inkeeping with the recent grime theme, let's get back to a true classic and groundbreaking work of music.

The award-winning album Boy In Da Corner by Dizzee Rascal was a shock to many when it scooped the Mercury Music Prize. It was certainly my first introduction to grime. So to see this brilliant mini documentary on the impact and importance of this release is a great watch.

Just gutted I can't get to the Boy In Da Corner gig. That would be pretty special, to say the least.

Posted by Steph Mulrine at 5:39 pm No comments:

Even The Guardian daren't kick up a fuss.

Posted by Steph Mulrine at 8:30 pm No comments:

Woke up with this on loop in my mind.

Trim just casually slaying it with a talking dub. Called Talking Dub. No fucking around.

Posted by Steph Mulrine at 12:35 pm No comments:

I need to write and share something positive. Something stirring. Something I cannot do without currently. Even if that brings only a few minutes respite from the other writing in my life.

The album sees the trio produce a sound of such solidity and clarity, it is as enriching as it is dark. The techno tracks have evolved and produced near perfect electro-soul-pop songs. And in an almost cruel way there is something deeply satisfying for me knowing that the Moderat project is such a tortuous one. Being aware that the union of Modeselektor and Apparat in pursuit of brilliance is difficult - they named their original EP akin to 'At The Cost of Health' - gives me hope working on my own tumultuous, but generous project.

Running is too fitting.

Posted by Steph Mulrine at 10:20 am No comments:

I think Mark Ronson may have copyrighted chart funk in the Twenty Tens. We might have to organise collectively to overthrow his tyranny and domination.

But not before enjoying Daffodils featuring that there Kevin Parker from Tame Impala. It is properly great.

This isn't the official video. But features Soul Train delights. You are welcome.

After Doves there was somewhat of a hole. A dull ache.

Yes, yes, of course continual listening to Lost Souls was going to be obligatory, there was Jimi Goodwin's solo stuff, and forever held in the highest of esteem was the beautiful electronica of Rebelski. But then Andy and Jez Williams decided to release an album. Under the name Black Rivers some of the tracks floated onto the internet and I was thoroughly hooked.

Voyager 1 is a personal highlight. Instantly familiar -- but if you mainlined Jez Williams voice as frequently as I did then it is bound to be familiar -- the track is paced with total abandoned and joy. That voice. Such comfort.

And when asked t'other day if Doves might ever reform...

And it is 14 years today since Pounding had its single release. I used to request this so frequently on nights out that one DJ used to play it almost as my entrance music.

Posted by Steph Mulrine at 9:16 pm No comments: 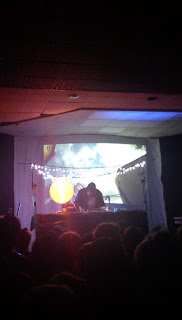 I think I thought I had shared this already. I assumed my love for Gold Panda and excitement at the new material would have overwhelmed me and I would have bored Pop Cultureddd with it. But we all know that insightful warning on making asssumptions. So we won't bother.

The single In My Car is sheer archetypal Panda. And bloody gorgeous too. I have played it a lot. A signature summer sound now. 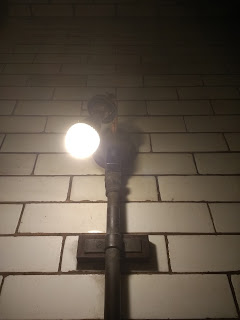 After a day writing in a historic library in Manchester t'other day, I took myself to Fopp to decompress.

Whilst browsing I heard this track and ran up from the basement floor to ask who was it. As it turned out it was this intensely amazing remix of Public Service Broadcasting by Boxed In. The track Valentina features vocals by Smoke Fairies.

It broke my little bubble of academic stupor. Reminding me of beauty. And it was much needed.

Posted by Steph Mulrine at 2:56 pm No comments:

All is not quite well.

To take the edge of the bleak for now is someone who amazes me. Reminds me that all expectations can be confounded in a positive way. Dario Rossi is a drummer. A travelling, busking percussionist. The first time I saw a video featuring him it had gone viral amongst muso friends and I spent the rest of that day tracking down who was the man in the video. Several years on this still feels me with delight, joy and gives me goosebumps of excitement.

Why? Because Dario Rossi does techno. Analogue techno.

And it will blow your mind!

Posted by Steph Mulrine at 12:32 pm No comments:

Mainly the Drag Race and this track.

May I call you Jiggly?
Posted by Steph Mulrine at 10:13 am No comments:

Email ThisBlogThis!Share to TwitterShare to FacebookShare to Pinterest
Labels: RuPaul

I woke up this morning with September by Earth, Wind & Fire stuck in my head. So I played it whilst eating toast and dancing around the kitchen.

Pretty good way to start the day, I reckon.

Posted by Steph Mulrine at 9:03 am No comments:

There have been some rather good remixes too from some familiar names.

Posted by Steph Mulrine at 5:16 pm No comments:

Email ThisBlogThis!Share to TwitterShare to FacebookShare to Pinterest
Labels: Radiohead

Deriving strength from this ear-worm, exemplary pop song by Sia.

Elastic Heart as a song is not to be under estimated, but is frequently misunderstood.

There was some controversy. Have a look.

Read article link and consider your feelings before deciding whether to watch the below video.

Posted by Steph Mulrine at 8:39 pm No comments:

Posted by Steph Mulrine at 9:24 pm No comments:

Return of The Field

I am not one to willing wish my life away. Especially given my academic preoccupation with mortality.

However, that has gone out of the window upon hearing the news that Axel Willner will be gracing the world with the fifth full-length The Field album, to be titled The Follower. It is to be released on April 1st and it simply cannot come soon enough.

Hopefully some tracks will appear before then. The sense of anticipation for this Mulrine at Pop Cultureddd is all too palpable.

A constant in my life.

Enjoy I Have The Moon, You Have The Internet from the second album Yesterday and Today.

Posted by Steph Mulrine at 11:22 am No comments:

Email ThisBlogThis!Share to TwitterShare to FacebookShare to Pinterest
Labels: Kompakt, minimal, techno, The Field, The Follower

Junior Boys are back!

The new album Big Black Coat is released on Friday 5th February. I am already obsessed.

The below album playlist might not hang around for long and may get pulled from YouTube so give it a listen and then buy it, you cheapskate! (She says with a sad bank balance looking back at her tell her not to buy any music)

I stumbled across this on Twitter due to my living in the immediate present that social media creates, but also always the past.

The record company Because Music have put together, quote: "An interactive journey through 10 years of sound".

And what an interactive journey it is! I will not spoil all the highlights, but I would block out the next hour of your life to have a little play.

Because Recollection.
Posted by Steph Mulrine at 8:32 pm No comments:

There was a point of 2015 where I seemed to be driving in the dark a lot. The glare of the street lights and the complete desolation that evening often brings were all the more heightened by this track. Usually on repeat.

Play it on whatever you own that produces the best quality sound. Preferably headphones, in the dark, and loudly. I also insist you listen to the end.

Applebottom may well be a promising producer if Let You is anything to go by.

There is a free download of the track via SoundCloud.
Posted by Steph Mulrine at 7:30 pm 2 comments:

Email ThisBlogThis!Share to TwitterShare to FacebookShare to Pinterest
Labels: Applebottom

One of my favourite people in the world seems to think I am "cool". She is great all respects, but probably somewhat misguided on that perception of me. But I will let her continue to think that.

So this is for her. Playing this tune gave me a bit of cocky bravado precisely when I needed it most yesterday.

Shamir is all the things you need in life. Catchy, soul-driven, electro fun and even has the all-important cowbell.

Be still my beating heart.

Posted by Steph Mulrine at 1:14 pm No comments: