The Rakes @ Inside Out, Darlington 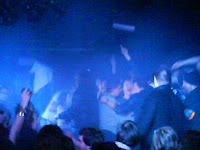 I realise all has been quiet around these parts for a while. But I always suppose that Pop Cultureddd is not an outlet for personal crises' and a journal of my thoughts. But my desire for writing, experiencing, listening, chatting shit about and generally centering my life around music again has been restored.

Last night I, with my hottie on my arm, went to see The Rakes at Inside Out in Darlington, hosted by the clubnight Amplified. I'd never been to a gig in Darlington and was riddled with doubts about what to expect. As I had arranged this as a gift for my hottie I was hoping it would at least leave a vague smile on his face. The venue itself, was beautiful. A disused warehouse possibly, bare-brick walls, dark wood glass panelled windows, beautiful chandeliers and huge gold gilded mirrors. The drinks were cheap too! And the sound quality of the gig itself was surprisingly good for a small club venue. I really was won over by the place. 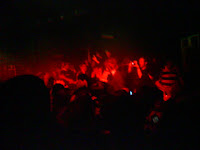 One of my worries before we went was that I didn't really think that Darlington would produce a crowd of people who liked The Rakes. I thought it'd be either lots of people who were unaware of the band and then you get annoyed feeling because you feel they don't appreciate an act you really like, or there would be my hottie and I and about thirteen other people. But it was really busy. With people who really, really liked The Rakes. It generated an astounding atmosphere. One which you couldn't help but get really carried away with. The hardcore kids at the front exerting a worrying amount of prolonged energy. Pushing, shoving, jumping about, jiggling unabashedly, they'll be bruised this morning. 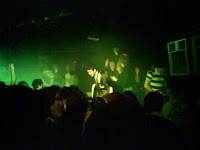 All of this really suited the brilliant performance that The Rakes put on. I've been lucky enough to have seen them on a few previous occasions (and even have a rather odd story of meeting the very polite Alan Donahoe) and have always enjoyed them, but I think this topped it all. Which for a band that is testing material for the release of their third album, is a real testament. Some of the songs they previewed broke away from traditional sound but in a way that was genuinely filled with anticipation. All the elements of The Rakes were there. A great staple guitar band that you can rely on to produce songs that will provoke a number of emotions. The same vitality, passion and love for performing obviously has not waned at all for The Rakes. It was obvious that this enthusiasm just fuelled an already exciting crowd with a distilled excitement that by the end of the encore burst into sheer delirium which saw most of the members of the audience run the stage.

If you can make out any of the images I have scattered throughout, they do in fact try and show the vast quantities of people the security gave up trying to remove from the stage. A prize for anyone who can spot a Rake.

I found a video. I apologise, but you will have to turn your head on its side, but do not strain your neck. I will take no responsbility. You have been warned.

Posted by Steph Mulrine at 10:12 am No comments:

Email ThisBlogThis!Share to TwitterShare to FacebookShare to Pinterest
Labels: Inside Out, The Rakes 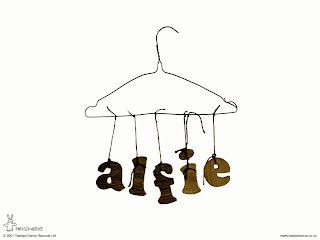 Any activity is better than no acitivty at all. And on today I noticed that on Alfie's MySpace there had been uploading of 'new' tracks. For about 5 minutes all sorts of possibilities rushed through my head. But the basic conclusion was that Alfie were going to get back together. I nearly put on one of my five Alfie t-shirts to dance around in with joy. They'd tour again and I'd eventually be able to fulfil a life long dream of seeing Alfie live.

But no. It was just someone updating the songs on the MySpace player with already existing NOT new songs. NOT songs that had been recently worked on due to a secret reunion of the band.

Bastarding disappointment.
Posted by Steph Mulrine at 5:59 pm No comments:

Email ThisBlogThis!Share to TwitterShare to FacebookShare to Pinterest
Labels: Alfie

Happy New Year or something.

I'm not in a great mood. But I love my little Pop Cultureddd and any of you who can stand to read it, I love you too. So less of the bloody neglect, yeah?

So this is doing the rounds and I must admit I really do like it. A lot. For those on the fringes of mainstream media, you know, you don't like chart and take recommendations from four different blogs and then show off to your friends when you had the 'fore-sight' to predict the outstanding rise of a new band.

No bitterness here. Its all love.

So lets have it. If you want generic hype and good things said about this band you could just go read the culture sections of the Guardian or tune into Zane Lowe's radio show, I assume.

White Lies - To Lose my Life

White Lies MySpace.
Posted by Steph Mulrine at 8:48 am 7 comments: