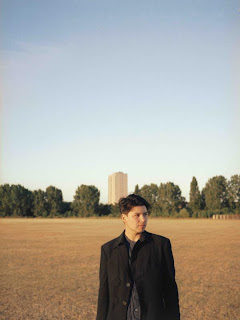 Every aspect of this excites me. Jamie Woon may not be reinventing the wheel -- no, Burial did that for us -- but he is certainly doing something very fresh and, in my opinion, bold.

So be sure to keep an eye open on music sites and newspapers like The Guardian that get very excited this time of year by 'hotly' tipping who will be big next year, effectively ruining the careers of those they are trying to big up. Who really wants only Guardian readers at your gigs? Not even I would enjoy that!

Posted by Steph Mulrine at 5:41 pm No comments: 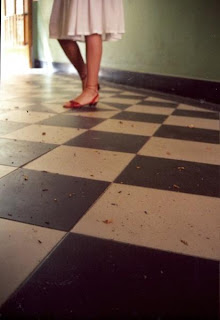 When we went to see Gold Panda at The Cut in Newcastle two weeks ago I was pretty taken aback by the whole evening.

The venue was odd to start with. Odd in an intriguing and kind of good way. It is supposed to look like a dilapidated warehouse/falling apart apartment block. Which whilst it had its charms, like the strip lights in the ceiling and interspersed between half formed stairs coming through the ceiling, which looked great when dim and acts were playing. I didn't understand the tables submerged into the floor. But a very cool little place. If it got more gigs like this I would be definitely going back. There is nothing worse when you really look forward to a gig only for the venue to be rubbish and spoil it.

Anyway, the real purpose of this post is to share the first support act. I'd suspected that there was two support acts, only to be told I was wrong by one of the people involved with the night, got there and there was two support acts. The Boys both sighed and agreed that they were fools and that I am always right. It is quite often the case this happens. And bloody hell, I wish I'd have been more prepared. I had a drink in hand and parka in a ball by my feet. Ghost Eyes seemed to rather coyly introduce themselves, no particular expectations, then proceeded to explode the club! And I mean explode. Various different looks were exchanged, but I failed to see anyone looking at their gig buddies with anything less than a particularly impressed face. The sound quality when they nearly killed us with bass was fantastic. Executed with perfection. It would have been an favourable way to have slipped into the afterlife/black hole for eternity.

For a band that only have only 11 followers on SoundCloud they really are very convincing and fully-fledged. I can only see them improving. But it was their live performance that was so amazing I just had to talk them up! There recorded stuff is good, but if you get the chance to see them live, I seriously recommend it! They have an upcoming gig in London that sees them on the same line-up as the almighty Matthew Dear.

Here is a track of theirs:

Oh, and yes, obviously Gold Panda was amazing. I saw him kicking around for ages before he went on and wanted to say something. But I literally had nothing to say that wouldn't have embarrassed me or him. At least one of us would have blushed.
Posted by Steph Mulrine at 4:09 pm No comments: 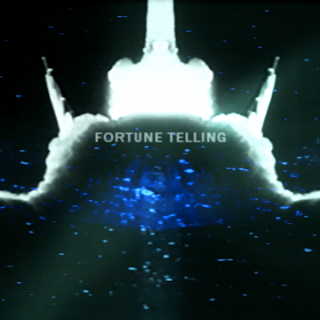 Funeral Fireworks -- what to say? I genuinely am unsure as to how I stumbled across this artist. But it probably occurred after yet another long stint browsing SoundCloud whilst ploughing through several journal articles. And immediately I was completely enthralled. Melodically complex in certain points but still retains an endearing naivety.

The Light Shines On Your Face by funeral fireworks

Future Shocked by funeral fireworks
Posted by Steph Mulrine at 6:39 pm No comments:

WRSTLRS - Tiny Mirrors Minotaur Windows
Posted by Steph Mulrine at 11:36 am No comments:

Email ThisBlogThis!Share to TwitterShare to FacebookShare to Pinterest
Labels: WRSTLRS

A much missed pop music blog would have probably burst at the seams upon seeing this.

'Impressed' is a word that doesn't convey what I feel towards this song and video. 'Awe', that is better. Awe.

Willow Smith - Whip My Hair from haute chicago on Vimeo.

Posted by Steph Mulrine at 3:11 pm No comments: 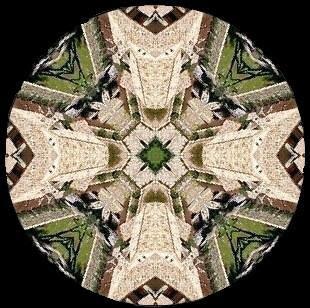 A blog new to me -- and pretty bloody awesome as it goes -- known as My Band's Better Than Yours recommended and hotly tipped a very fresh band called YAAKS. Who currently there is fairly little to say about.

A band with the mission statement:

Nice. Attempting to portray political philosophy through music. That is a sure fire way to, not most girls' loins, but certainly mine.

They sound fantastic too!

HRHRHYTHM by YAAKS
Posted by Steph Mulrine at 9:00 am No comments:

Email ThisBlogThis!Share to TwitterShare to FacebookShare to Pinterest
Labels: YAAKS 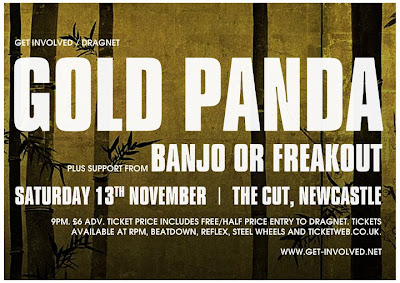 Banjo or Freakout is the act supporting Gold Panda at the above gig -- and the other dates on the tour -- which I am going to tomorrow night and am rather giddy about.

Upside Down by Banjo or Freakout

Go here for more tracks.
Posted by Steph Mulrine at 6:05 pm No comments:

Effortless. This is brilliant. I love P Money.

Posted by Steph Mulrine at 6:58 pm No comments:

It is a sound of music that almost inherently causes me to use oxymoronic phrases to describe it.

So I won't bother embarrassing myself. Just check out Kinnie The Explorer.

Kinnie the Explorer - Blind Spider from Elliott Trent on Vimeo.

Posted by Steph Mulrine at 7:19 pm No comments:

Email ThisBlogThis!Share to TwitterShare to FacebookShare to Pinterest
Labels: Kinnie The Explorer

I heard this ages ago, wrote myself a little note to check it out, then lost the note and have today just found the note. James Owen Fender is a new artist that is beginning to receive a lot of good chatter from all the people you want to notice you. So largely me blogging the track will do little-to-nothing in furthering his musical career.

The Cloud is possibly the most Northern idyllic, indie-pop song to come about in a long time. I really like it. The more I listen to it, the more I seem to smile.

And, the icing on the cake is that it is filmed in Filey. My Dad and lovely step-family live there. And The Boyfriend and I have incredibly fond memories of visiting. We'd love to go now, but it is such a tourist seaside town that we can't get a bus there this time of year. And whenever we go it is always basically cloudless skies. Just like the video.

So I'll dedicate this to my Dad and step-family. And the featured charity shop.

James Owen Fender - The Cloud from wearesealegs on Vimeo. 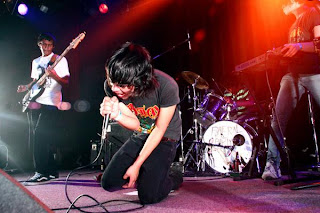 Excellent. I don't have to put myself through the trauma of an arena gig full of 30 Seconds To Mars fans to see Funeral Party. The prospect of that had made me bork.

But no! They have announced today a UK tour in the new year!

And here is Giant Song, which is a really brilliant track of theirs, and you can even download it. Look. See the button? It is the arrow pointing down. Get it? Go on, download it.
08 Giant Song by aimie
Posted by Steph Mulrine at 2:39 pm No comments:

I Hate You Just Kidding 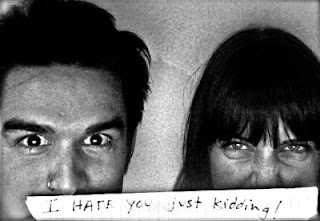 This sounds terrible, but I find it really quite a challenge to enjoy music like this nowadays. My housemate/dead-weight-round-my-neck/best friend/surrogate-incapable-teenage-son is actually fuelled by this sort of thing and, therefore, all car journeys will be accompanied by a very narrow spectrum of music. He has ruined it for me. Moron.

Coupled with the fact that all fucking mobile network adverts seems to be plundering every ounce of cute-twee-idyllic music to peddle and promote more rampant consumerism.

"I have such a beautiful, summery existence and spend most of my time frolicking in meadows. But I still need a brand new phone with the latest and most irrelevant technology every year! Now, now, now! I want a new fucking phone now! Otherwise the guy in the independent bookstore might not fancy me. Or I'll lose the ability to frost perfect cupcakes. Or I might start liking X Factor. A NEW PHONE NOW!"

Hello hipster, you probably don't have that many friends because your self-absorbed existence renders you unfit for human interaction. And you can't see past the irony of your alternative-seeking life actually further playing into the hands of the niche capitalists who have your every wish planned, mapped out and controlled remotely.

But it must be the vocals of My Little Dove with breaks in the voice as Jessi Fulghum sings that remind me of Tracyanne Campbell from the glorious Camera Obscura which have won me over.

And the deep tones of the other half of this duo, Jeremy Brock really add in Speakeasy, as does the pace.

I Hate You Just Kidding - Speakeasy [via YouSendIt for 7 days]

You are all probably going to like them. A lot.
Posted by Steph Mulrine at 9:50 pm No comments: