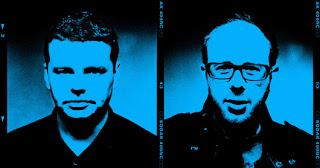 After an interview with The Chemical Brothers on 6 Music and hearing approximately 30 seconds of one of their new tracks I decided that I liked the new album.

They had mentioned that they had not done the album based around guest vocals. Which I like! A lot! Not having the pressure and constraints of particular vocals to work around or work them into tracks seems to have worked wonders on this album. It works brilliantly as an album.

It has some very different moments in it. And my current two favourite are probably very different from one another. The depth and ferocity of Horse Power means that as a track it is an actual phenomenon. But the dreamy and circular nature of Another World has actually had me hitting repeat far too many times as is healthy.

The Chemical Brothers - Another World from ikkunapaikka on Vimeo.

Email ThisBlogThis!Share to TwitterShare to FacebookShare to Pinterest
Labels: The Chemical Brothers